CHEERS! to your Two-Drink Self 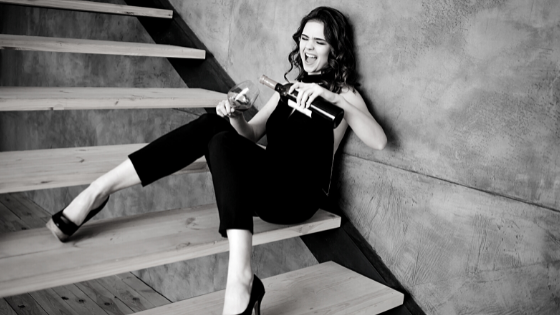 There’s nothing like awards season being in full swing and the highlights showing up all over my newsfeed and on the TV morning shows to remind me that I’m just really not so with-it anymore. There was a time not so long ago when I would have liked to have thought so, but now, not so much. Especially when it comes to new trends, pop culture and those things entertainment.

And I do realize it’s already nearing the end of February… but when exactly did Dry January become a thing? I mean, I get that it’s been part of many a New Year’s resolution for eons, but I actually only first heard it referred to as such this year. And in the context of someone boldly announcing they flat-out were not participating, thank you very much, and declaring their never-ending love for all things wine.

Perhaps I am their kindred spirit and just blocked it right out?

Because I generally do enjoy a cocktail. Or two.

And I was very much raised to be humble and that it’s boastful and egotistical to toot your own horn. So, it does go somewhat against the grain of my good little girl nature to say…

(Yes, you did absolutely detect a note of sarcasm there.)

Does it feel rebellious

So much so, apparently, that she acquired her own moniker somewhere along the way, too.

If I do say so myself, Two-Drink Patty is fun and funny. She’s more bold and confident. Sassy. Occasionally, almost brazen and badass. She’s outgoing and engaging. Rather flirtatious. Definitely more care-free and much less likely to give a fuck for a drunken glow. Especially about what other people think of her.

And all validated by at least a handful of others who would remind me repeatedly and just often enough that, “you’re more fun when you drink.”

Yeah… who would blame me for admitting it’s tempting to want to stay somewhat permanently pickled?

And so, when physical wellbeing becomes a real issue and when faced with the prospect of quitting… well, it’s then pretty hard to continue to stick your head in the sand, isn’t it? Especially when health is right at the top of the list of self-care priorities.

What comes next? Will power? Resignation? Mourning?

How about a fundamental choice?

Alcohol can get a lot of credit. Credit for being that spark you might need to make you brave enough to try something new or loosen the tongue to say what needs to be said. Credit for turning you into all those things that that nagging, super-critical voice in your head insists that you just are otherwise not.

You are already enough

…even a great dancer?

If… or when you choose to sober up and dry out, does that mean that that likable — maybe even lovable — two-drink alter-ego of yours is doomed to wither up and die and be lost to you forever?

What if the missing ingredient to fuel those dormant traits that you secretly — still somewhat shamefully — like and admire had zero to do with that so-called Liquid Courage and the sugar, yeast and various grains that can wreak havoc on your body and health?

What if you didn’t need an excuse?

What if it was simply one thing? And 100% non-allergenic, to boot?

What if you gave yourself permission?

to be THAT woman

And the good news:  Permission comes without the dreaded hangover. Literally.

Now, the vulnerability hangover might just be another story…

If you’re looking for tools to deal with said vulnerability hangover, you can read more here.

Want to get a better sense of where you’re at now. so you can determine some next steps to get you to where you want to go? Click here to receive Get Real – The Quiz.

If you’re looking for some one-on-one support, contact me here for details on my personalized programs.